A Brief History Of Our Church

The Storms Creek Missionary Baptist Church has had a long and rich history.  Organized in 1812, the church was an arm of the Crane Baptist Church.  In 1814, just two years after the church’s organization, the church voted to support the missionary efforts of Adoniram Judson.

In 1820, the banks of the Ohio River washed away the original log structure, forcing the church to relocate just across the road.  This second building burned, and the church was forced to rebuild yet again.  No information exists detailing what happened to this third structure.  What is known is that in 1885, a plot of land located approximately half a mile farther up Storms Creek was obtained by the Storms Creek Missionary Baptist Church where a fourth structure was erected.  Just two years later, this fourth structure was washed away by flood waters.

On December 23, 1887, land was purchased from the Hecla Iron and Mining Company.  Here, on a hill overlooking the village of Coryville, a fifth building was constructed, serving the membership for 63 years as a place to worship the Lord and to preach the Gospel of Jesus Christ.

In the Spring of 1950, the membership had just bought new pews and remodeled the building when disaster struck again.  Sunday night, April 19, 1950 found the building almost full of people.  After an evening of praising the Lord, the congregation went home.  The following morning, the congregation awoke to find the building had burned to the ground over night.  The cause of the fire has never been determined.

The congregation acted quickly.  Immediately a meeting was called to order at the Coryville School and a building committee was formed.  Late in 1950, the committee purchased four acres from the city of Ironton and construction began on the sixth and present building.  In the late Summer of 1951, the church moved into the basement of the building and continued to worship there until the fall of 1957.  The building was far from complete, but by that time enough work had been done on the building that the congregation was able to buy pews and move into the auditorium.  By Sunday, October 2, 1960, the building was complete, debt free and ready to be dedicated to the Lord as a place of worship and service.

The history of the church has been long and filled with many trials and hardships as well as many blessings and victories.  We are thankful to God for the faithful saints of old who faithfully fought the battles, contended for the faith, and passed on to the succeeding generations the wisdom and blessings of the Word of God, instilling in them the hunger to serve the Lord.  May we remain faithful to the task that lies before us and continue to serve until Christ returns. 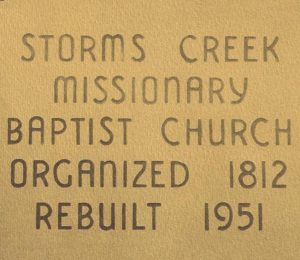